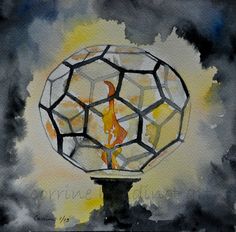 I saw one in a cleft of midnight blue rocks. The rocks were loosely arranged on the sand to form a cavern of sorts that was open to the milky night sky. She had been there for some time for her eyes had adjusted to the darkness and she was delighted to dance in the sand. She shimmered in starlight and the milky mysterious light of the moon.  After a time, there appeared many small lights. They were dots of bright color laughing around her. As I watched them flitting before her, a handle formed along her back. It was like a handle on a big glass beer mug. It came out of the small of her back and was attached to the back of her head.  I saw the Hand of the Father come and pick her up by the handle on her back. He tipped her over and out of her came clear, silver liquid. The liquid appeared to be alive. It poured over the tiny lights of color and they became alive and had the same form as the one. Then, the Hand of the Father scooped them out of the cavern and lifted us up into the night sky. As we surveyed the land below us, we were given an understanding from the Father’s Heart, of His love.  When the understanding had reached its fullness, the Father blew over us and we were lifted and scattered over the land. We floated out over the land in many directions, both far and wide, directed by the Father’s Breath. As we were planted in the place He had for us, there was a silence for a moment, almost so that I wondered if the light were lost, but then a warm glow would appear, spread and illuminate the place where it landed. The glory and knowledge of the Lord filled the whole Earth. It was surely a sight to behold.~Corrine